A Few Thoughts on the ALS Ice Bucket Challenge

Weighing in on all the scrutiny and criticism surrounding the ALS Ice Bucket Challenge.

Unless you’ve been living under a rock this past month, you probably now know the story behind the plethora of videos people are posting of themselves dumping a bucket of ice water on their heads. Lately, most Facebook and Twitter feeds have been flooded by videos of the ALS Ice Bucket Challenge, a social media campaign designed to raise awareness and money for ALS research.

Saying the challenge has gone viral doesn’t quite do it justice. It’s nothing new to see a certain news story or marketing campaign dominate social media chatter for a few days, but we’ve never seen anything take over social media for the duration this particular phenomenon has. We’ve grown accustomed to seeing a few celebrities join a campaign to support a cause; but we’ve never seen something so widespread to the point of drawing endorsements from hundreds of celebrities, including Bill Gates and Charlie Sheen. Talk about a powerful trio, albeit different types of power, but powerful nonetheless. 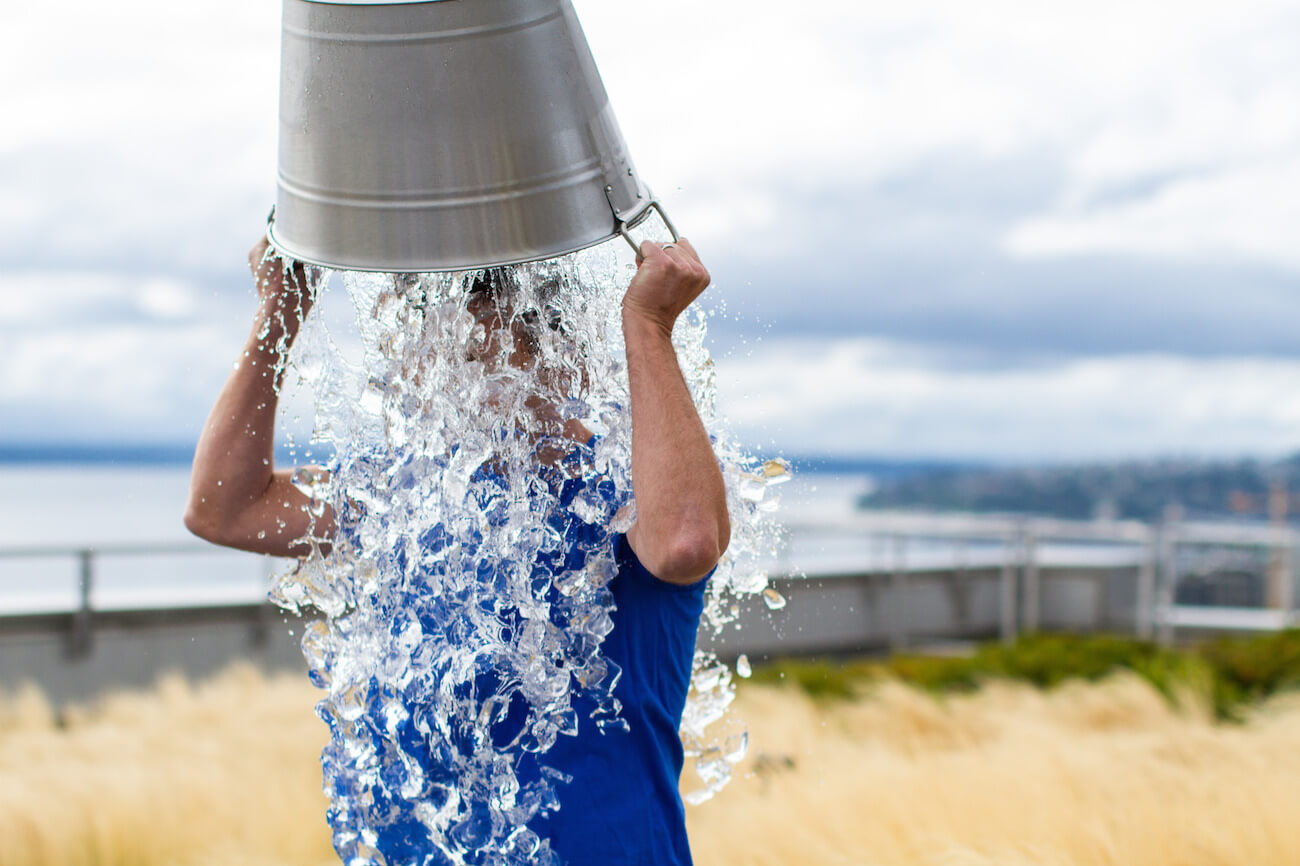 The challenge was created with all intentions geared towards supporting the great cause of furthering ALS research. However, anything under this much scrutiny will eventually draw its share of criticism, whether fair or not. Although a vast majority of ALS Ice Bucket Challenge talk has been overwhelmingly positive, lately I’ve noticed a few more pessimists stepping out of their shadow to let their displeasure be known in hopes of stirring up some unnecessary commotion. A part of me doesn’t want to do them the dignity of even discussing what exactly it is about this challenge that apparently irritates them. However, I’ve decided to do the exact opposite, and address them as straightforward as possible, so that I can combat their cynical peeves.

Here are a few thoughts of my own on these negative claims regarding the ALS Ice Bucket Challenge:

Claim #1: “People are only pouring a bucket of water on their heads so that they DON’T have to donate.”

The overarching goal of the ALS Ice Bucket Challenge is to raise money and awareness – not exclusively to raise money. The challenge doesn’t specifically state that you have to pour water on your head OR you have to donate; and as the amount of money that has been raised shows, most people are doing both. Yes, there certainly have been a number of people who have participated in the challenge and not proceeded to donate towards the cause, but does anything bad actually come from that? Is essentially raising awareness – even if money isn’t involved – detrimental in any way, shape, or form? Of course not.

Claim #2: “I’m tired of seeing my Facebook feed flooded with these videos. This has gone on too long.”

Take a look at the total overall Ice Bucket Challenge donations at the end of the past 3 days:

If the overall number of $70.2 million wasn’t enough, take into account that this challenge is still raising around $9 million per day and every penny is going towards a great cause. I’m sorry that these videos are inconveniently making you scroll a little bit further to see all the pictures of what your friends are eating for dinner - but I hope that extra scrolling only increases.

This is a direct quote I heard when walking down the street a few days back. I’ve actually tried to come up with a single reason to understand their argument, but I have nothing. I’m not disputing that the statement itself doesn’t have any truth to it; I just don’t understand its negative portrayal of the Ice Bucket Challenge.

ALS awareness has skyrocketed over the last month specifically due to this campaign. Thanks to this challenge alone, thousands of individuals who did not know what ALS is a month ago now do. And to be honest, it doesn’t matter how much they know or don’t know about the disease itself – where’s the harm in people coming together in support of a great cause?

For more information on Amyotrophic Lateral Sclerosis (ALS), perhaps better known as Lou Gehrig’s disease in the United States, check out these links:

- ALS Association: What is ALS?


Claim #4: “The only thing the ALS Ice Bucket Challenge is doing is wasting water.”

First and foremost, I am in no way in support of wasting water, nor am I belittling the importance of saving water. I just don’t consider the water being used for the ALS Ice Bucket Challenge as being wasted. Some people, like Will Oremus of the Chicago Tribune, are denouncing the #IceBucketChallenge in favor of the #NoIceBucketChallenge, which calls for contestants to simply donate money without wasting water and all the “self-important drama” of filming it for social media. The fact is, pouring water on your head is the aspect of the challenge that is responsible for it going viral in the first place. Without it, there’s simply no way donations would have jumped from $2.5 million to $70.2 million a year later.

Here’s some perspective on what it feels like to live with this monster of a disease, written in this inspiring article by Bo Stern, whose husband is suffering from ALS:

- Pick up a 10-pound weight. Now imagine it’s your fork and move it from your plate to your mouth repeatedly without shaking.

- Sit in a chair for 15 minutes moving nothing but your eyes. Nothing. No speaking, no scratching your nose, no shifting your weight, no changing the channel on the television, no computer work. Only your eyes. As you sit, imagine: this is your life. Your only life.

- Borrow a wheelchair or power scooter and try to maneuver quickly through the aisles at Walmart, without speaking. Note the way people react to you.

- Strap 25 pounds to your forearm. Now, adjust your rearview mirror.

- Using none of your own muscles, have your spouse or child or friend get you dressed and brush your teeth. Write down some of the feelings you have being cared for in this way.

- Before you eat your next meal, take a good, long look at the food. Inhale deeply and appreciate the aroma. Now, imagine never being able to taste that – or any other food – for the rest of your life.

- Put two large marshmallows in your mouth and have a conversation with your friends. How many times must you repeat yourself? How does this make you feel?

- Go to bed and stay in one position for as long as you possibly can, moving nothing.

- Strap weights to your ankles and climb a flight of stairs, taking two at a time. That’s the kind of strength it takes for someone with ALS to tackle the stairs on a good day.

- Install a text-to-speech app on your phone or iPad and use it exclusively to communicate for one day.

Here’s a challenge for you: read all that and then try and tell me how inconvenient and annoying a few videos on your timeline are.

eMedCert is a premier provider of online courses for ACLS, PALS, and BLS that adhere to the American Heart Association standards. For more information, visit our website or email us at [email protected]